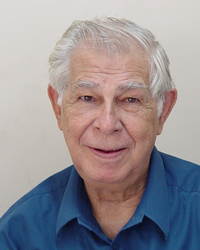 Dr. Bressani’s extensive research activities generated over 500 published papers in Europe, the US and Latin America. In honour of this life-time commitment to maximise the understanding of the nutritional potential and limitations of local basic foods and to improve these foods successfully by using simple low cost technology at the service of consumer health in Latin America, Dr Ricardo Bressani was awarded the 2003 Danone International Prize for Nutrition

In more than 40 years of ongoing research activities on finding practical solutions to local nutrition issues, which affect women and children in particular, Dr Bressani’s findings have had a profound impact on the wellbeing of populations in Guatemala. Realizing the importance of nutrition on public health while being a student, he started pioneering soon after completing his basic scientific education in 1951. In his earliest work he studied the genetic variability of the nutritional value of corn – a cereal grain on which Guatemalans as well as most Latin American populations greatly depend on- and a topic he continued to study throughout his entire career. The aim of this research was to obtain improved varieties with better lysine and tryptophan content-amino acids in maize which limit the nutritional quality of its protein. Bressani’s breakthrough methods in this area led to the development of Opaque-2 corn – with a protein quality nearly equivalent (90%) to the one found in cow milk- found by Purdue University scientists in 1964. Further studies on the amino acid supplementation of maize, rice, wheat flour and oats in young children were carried out. The results of these studies among other have proven useful in relation to the improved modification of the FAO/WHO reference amino acid pattern.

In light of the stringent protein-energy malnutrition problem (PEM) -the most lethal form of malnutrition in Guatemala, Dr. Bressani continued in 1953 research activities on the development of vegetable protein mixtures for children and adults. Studies followed to formulate a series of mixtures based on local resources (cereals, legumes, oil seeds, starchy foods) and to test the nutritional value and safety for human beings. This ambitious research project led to the development of a series of high nutritional quality products, which have been on the Guatemalan market for over 40 years and have become part of the Guatemalan food basket and diet. In order to maximize acceptability of these protein mixtures amongst the population, producers successfully organized local information and testing/ sampling sessions to explain the nutritive value of the products to the affected populations. The success of these projects caught the attention of neighbouring Latin-American countries such as Colombia, Venezuela, Costa Rica, Panama, and others.

In 1956 Dr. Bressani pioneered in the scientific literature with his studies on the nutritional and technological implications of the “nixtamalization” process of maize to produce tortillas and other products. Nixtamalization is an old Maya and Aztec cooking process by which corn is cooked in a lime solution- and is still widely used in Latin America today. Dr Bressani’s extensive research throughout the years led to the discovery that nixtamalization generates significant losses in B-vitamins; changes in protein solubility; decrease in fiber and phytic acid content, but also to substantial gains in calcium. More specifically, Dr Bressani established that -due to nixtamalization – calcium contents in the whole grain and endosperm of 11 tested varieties increased 18 times due to lime cooking when compared to calcium in the raw sample, and in the germ about 24 times. This calcium was found to be highly bioavailable. This breakthrough insight brought Dr Bressani to the understanding that nixtamalization was a key process for the prevention of calcium deficiency – a very important finding given for populations which have a diet that is likely to induce such deficiencies due to poor consumption of foods of animal origin such as milk. A protein – vitamin-mineral supplement for tortilla was developed in 1970 and studies with children showed it highly improved protein value. Recently vitamin C addition to tortilla flour has been shown to be relatively stable and helps to increase iron bioavailability. At present, the nutritive value of the nixtamalization process has also been acknowledged in other parts of the world: in Europe (UK) for example, products resulting from nixtamalization have already been brought onto the market.

Throughout the years, Dr Bressani extensively studied food grain legumes such as, for example, common beans, which constitute the main supplementary protein source in the Latin American diet. His research established the exceptionally high protein complementary effects of beans to cereal-based diets of mixtures of 7 parts cereals / 3 parts beans. The quantitative needs of grain legumes in food systems containing cereals tubers and starchy foods were established by Dr Bressani thanks to a new short nitrogen balance technique usable in adult human subjects. Dr Bressani also gave much attention to bean processing and nutritive value, to the hard-to-cook problem due to poor storage which not only increase energy expenditure during cooking but also affects nutritional quality, to the nutritional role of polyphenolic compounds affecting protein utilisation and finally to the protein digestibility problems in humans. Today, the optimum mixture of 7/3 is being used for the development of dried soup mixtures and as a component in composite flours