Gökhan S. Hotamisligil, MD, PhD is the 9th recipient of the Danone International Prize for Nutrition. Dr. Hotamisligil is Chair of Harvard University’s School of Public Health Department of Genetics and Complex Diseases and James S. Simmons Professor of Genetics and Metabolism. He is an internationally recognized leader in nutrition science, and through his discoveries he has generated major insights regarding metabolism and immunity.

He earned his medical degree at Ankara University Medical School in Turkey, completing his internship and residency at Ankara and the Royal Hospital for Sick Children in Glasgow. He received his PhD in Biological Chemistry and Molecular Pharmacology at Harvard Medical School, where he also completed fellowships in Genetics and Cell Biology.

Dr. Hotamisligil has continued his academic and professional life at Harvard School of Public Health, mentoring and training students, and now serves as Chair of the Department of Genetics and Complex Diseases. He is also an associate member of both the Harvard Stem Cell Institute and the MIT-Harvard Broad Institute, and an adjunct investigator at Harvard’s Joslin Diabetes Center. With more than more than 150 published papers that have received more than 30,000 citations, Dr. Hotamisligil has explored immunology, molecular pathways, inflammation, metabolic disorders and how abstract discoveries can become translational medicine. Dr. Hotamisligil has received great commendation for his success in applying his findings to human disease, physiological implications and nutritional input. 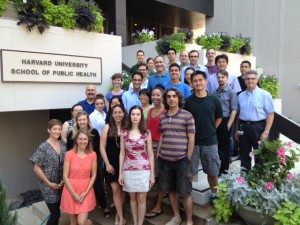 Dr. Hotamisligil’s research program at Harvard University is centered on understanding the clustering of chronic metabolic diseases in a large proportion of the human population. His approach has been based on exploring the fundamental mechanisms underlying the susceptibility of modern humans to metabolic disease. He made the first leading discoveries that led to the emergence of a new field of study, now referred to as immune-metabolism. Through his research, Dr. Hotamisligil identified key molecular pathways and mechanisms by which immune and stress response pathways impinge upon insulin signaling and metabolic regulation.

He discovered complicated paths that led him to the identification of several molecular pathways that link obesity and diabetes, and identification of the links between inflammatory activity and insulin action. Additionally, he discovered cJun NH(2)-terminal kinase (JNK) as a key inflammatory kinase involved in the integration of immune and metabolic responses in obesity and type 2 diabetes, and he discovered protein kinase R (PKR) and its essential role in linking metabolic signals to innate immune responses and inflammasome activity.

Dr. Hotamisligil identified molecules involved in recognizing metabolic, nutritional, and stress signals during disease process, and the underlying mechanisms. More recently, Dr. Hotamisligil put forward a concept to explain how nutrients create stress and inflammation. He identified endoplasmic reticulum dysfunction as an important mechanism underlying obesity, insulin resistance, and type 2 diabetes. This concept has provided tremendous excitement in the nutrition and metabolism field, and has preventive and therapeutic potential to human disease. Additionally, he discovered a novel inflammatory mechanism driven by nutrients, in metabolic and immune cells. The finding has the potential to allow for the exploration of nutrient integration into stress and inflammatory pathways, and how nutrients may trigger innate immune response.

He discovered lipid chaperone proteins as central molecules dictating the biology of lipids, and he demonstrated their role in metabolic disease, including atherosclerosis.

While pursuing the hormonal links between adipose tissue and liver, he identified a chaperone-controlled biologically active fatty acid with profound effects on the liver and muscle tissues, and a novel hormone regulating hepatic glucose production. A similar biology is now emerging from human studies, and intervention tools are being developed for use in humans.

Dr. Hotamisligil is one of the most prolific and innovative scientists in the field. His work has attracted thousands of researchers in diverse fields with important translational implications. He has made seminal findings and has provided paradigm-shifting discoveries into the understanding of chronic non-communicable diseases related to human nutrition, and the molecular mechanisms by which nutrients produce their biological effects. Currently, many drug development programs and clinical and nutritional intervention trials are either directly the result of his discoveries, or inspired by the concepts emerging from his findings.